As the agency in charge of discovering the mysteries of the solar system and beyond, NASA constantly embarks on tough challenges. With a small portion of the U.S. federal budget, the agency has helped develop capabilities that can help understand and mitigate pressing issues such as the Earth’s changing climate. These capabilities include monitoring our world from space, helping to develop different sources of energy, and studying Earth’s climate by analyzing other planets’ patterns.

For years, NASA has collaborated with NOAA, the European Space Agency (ESA), and other organizations for missions in low Earth orbit that measure different factors of Earth’s climate. An example of an important mission for climate is Sentinel-6 Michael Freilich, partnership between ESA and NASA that launched to space in 2020 to study how changes in our climate are affecting sea rise. Another example is the Global Ecosystem Dynamics Investigation mission. Consisting of an instrument aboard the International Space Station, the mission measures how deforestation has contributed to atmospheric carbon dioxide (CO₂) concentrations. 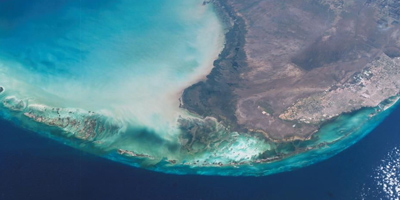 But how have programs in deep space helped the Earth?

Robotic and human missions to the Moon and beyond are hard endeavors, which is exactly one of the reasons why we go to space. If we are not taking on hard tasks, we are not solving problems or inspiring the world to go further. Exploring and making discoveries warrants massive creativity, as do some of our most pressing issues on Earth. Deep space projects have supported the research and development of alternatives to common sources of power on our planet that could drive climate change.

Why is trying to find alternative energy sources important? Normally, when light coming from the Sun reaches the Earth’s surface, it is absorbed and radiated toward space. Certain gases trap heat in the atmosphere as it travels upward and radiate heat back into the surface, keeping the Earth warm. This process is called the greenhouse effect. However, an overabundance of greenhouse emissions warms the planet more than necessary. Water vapor, carbon dioxide, methane, and nitrous oxide are all greenhouse gases. All of them, except for water vapor, are believed to be driving a change in our planet’s climate.

From plans to develop a habitat that could independently support life during crewed trips to Mars, NASA started looking at reliable energy methods to power the potential system. Solar power can be a problematic source of power on Mars because severe dust storms can black out the planet; but researchers found that wind power is an energy type that can work for future human visits to that world. NASA’s efforts to find a viable energy source to power life support systems on Mars have resulted in the design of a low maintenance wind turbine that can function in extreme conditions, both on Mars and on Earth. Wind power is a renewable source of energy that has a smaller impact on the Earth’s environment compared to more traditional methods.

Solar power, a source of energy that also has a lower effect on Earth’s climate than other, more traditional sources, has also benefited from NASA’s programs. Throughout the history of space exploration, spacecraft like MESSENGER, Dawn, and the Curiosity rover have used solar cells. Even when it was almost prohibitive to extensively develop solar power on Earth, the agency was still a customer for solar cells and kept solar research going. Investigations by commercial entities in partnership with NASA have resulted in the development of innovations such as concentrators that enhance solar power systems and efficient cells that cut solar costs, as well as the application of space shuttle engine production expertise to produce solar power technology.

In addition to science missions and ongoing plans for human spaceflight beyond the Moon, looking for life on other worlds has yielded environmental benefits for the Earth. One of the ways to look for signs of life on Mars is to search for clues such as methane, which, at least on Earth, is usually created by bacteria. Methane is also the main component of natural gas and, as noted earlier, a harmful source of greenhouse emissions. A tool developed by NASA to detect hints of methane aboard the Curiosity rover called the Tunable Laser Spectrometer (TLS), now helps detect leaks in natural gas pipelines here on Earth.

How about planetary science and its climate applications?

Data from missions to worlds beyond Earth has been crucial for understanding how and why a planet’s climate evolves. A planet cannot be subject to laboratory investigations that make it react to different experiments and scenarios. Moreover, interactions between a world and its atmosphere do not fit into simple calculations. Therefore, comparisons between Earth and other planets’ conditions through climate models have been helpful in understanding our own planet’s behavior and where we might be headed, and data from different stages of other worlds’ lifecycle has been needed to understand our own climate.

Planets that are similar to Earth, like Venus, have served as workrooms for understanding climate change causes and evolution. NASA’s Pioneer mission, launched in 1978, offered data necessary to confirm the composition of Venus’ atmosphere, verifying that CO₂ plays a big role in the planet’s hellish climate system. The mission also revealed that Venus once had water on the surface that had evaporated, confirming that a planet’s atmosphere and climate can change overtime.

Likewise, studying Mars has played a role in understanding our own climate. Mariner 9, a mission that launched in 1971, observed that dust had a decidedly strong influence on Mars’ temperature, showing that haze could warm up that planet. This helped confirm that certain elements in a world’s atmosphere could cause its temperature to change.

Because of the complexity of figuring out all of the elements that contribute to climate change, increasing the number of planets that can be studied through space missions also increases the chances to learn about the Earth. Space missions have been crucial in producing the necessary data to increase our knowledge regarding climate.

What assistance can we get from human space exploration programs like Artemis?

NASA’s Artemis program aims to return humans to the Moon. But the agency also plans to use the project to perform a wide range of scientific research. As outlined in the Artemis III Science Definition Team Report released in 2020, the surface of the Moon provides a stage for heliophysics and astrophysics, as well as for Earth science. One of the advantages of the lunar surface regarding Earth observation is its proximity to Earth. The Moon’s orbit at 60 radii can offer higher resolution views of our planet than cislunar locations such as the Lagrange L1 point, where other deep space observation satellites are located.

Space exploration is challenging. At the same time, the rewards are worth the effort. When we explore, not only do we advance our knowledge of the universe, but we have the opportunity to develop technology and science that help solve pressing issues right here on our planet.