Featured Member :: Made In Space

The International Space Station (ISS) serves two critical roles for pioneering space development. It is our gateway to human exploration of the solar system and an incubator for the commercial development of space beyond telecommunications. Made In Space is a small business that has capitalized on the unique capabilities of the ISS to spur technological and business innovations for both. Our mission is to transform the way people live and work in space through manufacturing at the point-of-use. We envision a vast space enterprise unlocked by the ability to build what you need, where and when you need it.

In Space For Space

A journey of millions of miles begins with a single step. In partnership with NASA and supported by the Small Business Innovation Research (SBIR) program, Made In Space developed and flew to the Space Station, in 2014, the first 3D printer for microgravity. Additive manufacturing is ideal for space exploration missions because it is compact, only uses as much physical material as the job requires, and allows immense customization. Using lessons learned from NASA-sponsored parabolic flights, we created and demonstrated a control system that ensures a 3D-printed object in space is functionally identical to one printed in the same device on the ground.

Two years later, we flew our second-generation printer – the Additive Manufacturing Facility (AMF) – as an enabling capability for the ISS National Laboratory through the Center for the Advancement of Science In Space (CASIS). Now that the technology is sufficiently advanced, Made In Space provides hardware-as-a-service to our customers, including NASA in low Earth orbit. Looking to the future, Made In Space is working with the companies developing the NextSTEP deep space habitats to greatly reduce the logistics chain for sustaining long-duration missions. Our goal is for support printers to make finished parts on-demand and automatically stow the parts until needed. This can help reduce mass requirements for deep space missions and enhance the ability of humankind to benefit from “in situ resource utilization” – that is, the ability to make use of materials we find during exploration or commercial development missions in deep space.

The precise manufacturing control mechanisms perfected on the ISS are the impetus for our next giant leap. Most 3D printers make objects smaller than themselves. Made In Space has figured out how to additively manufacture objects in space that are bigger than the fabrication device. This technology allows us to build more capable and adaptable spacecraft because the size of the rocket no longer constrains the size of an operational satellite, for example. We call this the Extended Structure Additive Manufacturing Machine, or ESAMM, for short. The first commercial ESAMM device is being built now for a private customer. When complete, the machine will be integrated with a CubeSat bus. It will test the manufacturing of new functional structures that were previously unavailable for such a small satellite platform. 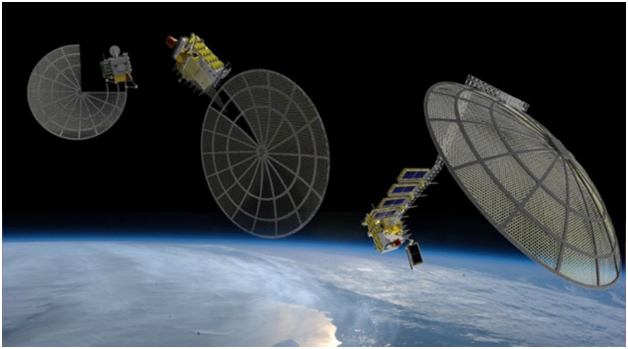 When ESAMM is integrated with robotic assembly, an Archinaut is born. Made In Space is currently leading the Archinaut Development Program, with industry partners Northrop Grumman and Oceaneering Space Systems, under the auspices of NASA’s Tipping Point program. This flagship effort by the Space Technology Mission Directorate advances critical new technologies, with both exploration and commercial applications, from the lab to real products.

Over the next two years, Made In Space and our partners will build two prototype systems for manufacturing structures of nearly any size and shape and assembling them in space. These functional prototypes will be tested in the NASA Ames thermal vacuum chambers, ahead of flight demonstrations of a fully-integrated Archinaut system.

AMF and Archinaut are revolutionary systems that will make it easier to work in space by using the microgravity environment to build useful objects and structures where they are needed.

In Space For Earth

The ISS National Lab, managed by CASIS, makes the transportation and research resources developed by NASA available to private industry for advanced R&D in space. This enables small businesses, who could not previously afford access to space on their own, the opportunity to test new technologies and explore phenomena with direct applications for new products.

Thanks to basic science research done by NASA and the US Air Force, we know that some exotic optical fibers can be formed in microgravity with attenuation properties 10 to 100 times better than their terrestrial counterparts. This work must be done on-orbit because parabolic or suborbital flights are too brief to pull long fiber cables.

Made In Space is building the first machine to generate spools of these exotic fibers and safely return them to Earth for commercial sale. An exclusive partnership with exotic fiber industry leaders, ThorLabs, provides us with the world’s best fluoride glass. Befitting a venture that may open an entirely new economic sector in Low Earth Orbit, this project is entirely privately funded.

The fiber manufacturing device will first fly to the ISS later this year. We will use this unique orbital laboratory to perfect the production process, develop new material formulations not currently possible, and assess the addressable markets for space-based materials. Once a critical mass of customers is reached, we can then transition production to commercial operations off the Space Station. 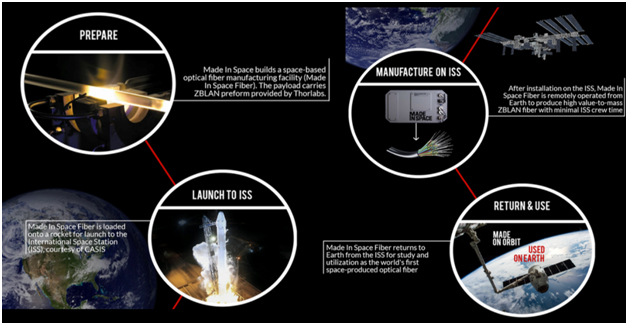 This progress is ultimately the most important legacy of the ISS. It is teaching us both how to live and work in space sustainably and how to start bringing the resources of the solar system into our economic sphere. Its success will be measured in the missions of discovery launched to the Moon, Mars, and beyond and the industrial ventures in space that were not previously possible.